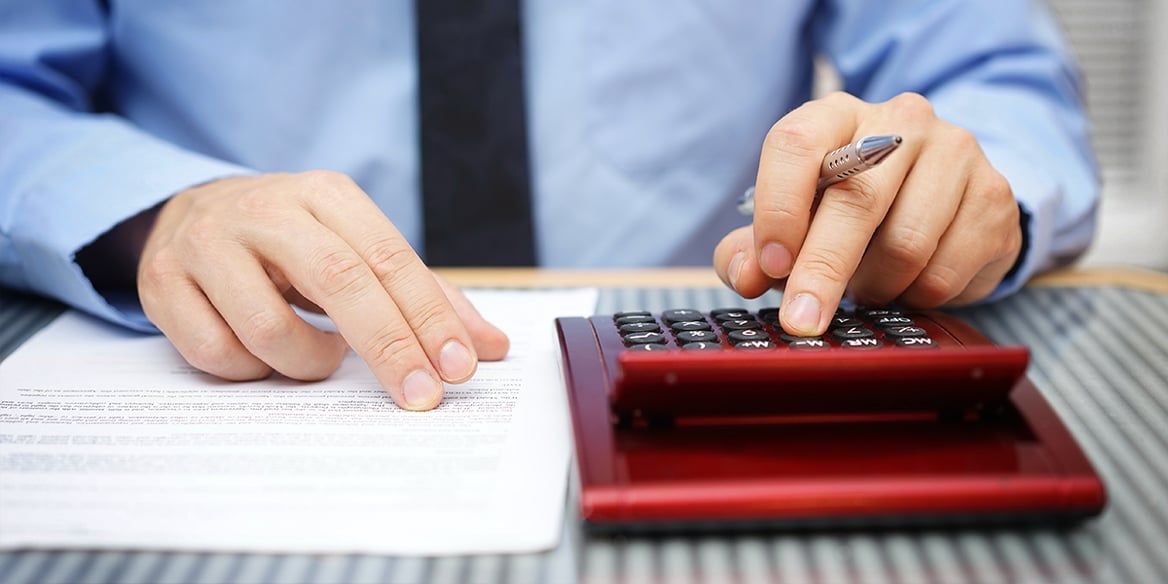 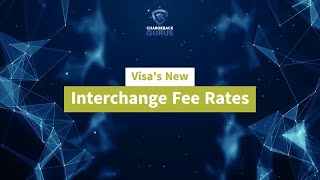 Merchants have to deal with a wide variety of fees when operating their business, but the two that typically get the most attention are the markups charged by payment processors and chargeback fees. This is not without reason, since these are some of the fees merchants have the most control over. Merchants can switch to a different processor if they're unhappy with the markup they're being charged, and there are a number of things merchants can do to prevent chargebacks.

There's one fee that affects merchants more than any other, however: the interchange fee. Most of the money that's taken out of every card payment a merchant accepts goes toward this fee.

Unfortunately, there's not much merchants can do about high interchange fees, since these fees are set by the card networks themselves. The only option merchants have is to refuse to accept a particular brand of credit card altogether.

Smith's Food & Drug tried that in 2019, refusing to accept Visa credit cards in protest against high interchange fees. However, they reversed that decision about six months later without giving a reason why.

While it's possible that Visa caved and gave them a special rate, it's more likely that the cost of turning away customers simply became too high.

Visa has merchants in a bit of a bind when it comes to interchange fees, and for the first time in a decade, Visa is about to roll out big changes to their fee schedule. When and why are Visa's interchange fees changing, and what do these changes mean for merchants?

What is an interchange fee?

An interchange fee is a percentage of each card transaction that the card network takes to give to the issuing bank. These fees are intended to reward banks for issuing credit cards and compensate for some of the risks involved.

While you're likely familiar with the merchant discount rate that's charged with every card payment you accept, you may or may not know the individual components that make up that fee. For most merchants, there are three fees that are assessed with each transaction:

Of these three, the interchange fee is usually the largest. The stated reason for these fees is that banks take on risks when issuing credit cards, and the fees compensate them for the money they lose to bad debt. Of course, a higher interchange fee also incentivizes banks to issue credit cards of that brand over the others, meaning the card network will have more transactions they get to take a piece of.

Why is Visa making changes to interchange fees?

According to a document Visa sent to banks regarding the impending interchange fee changes, the adjustments are designed to serve two objectives:

Visa has been pursuing a strategy of increasing acceptance of its cards in new markets. Some markets still use cash for most purchases, and others have largely skipped credit cards and moved straight to digital payments. Both of these options often result in lower fees for merchants, making them reticent to start accepting credit cards if their customers aren't demanding it.

In addition, there are some areas where customers aren't in the habit of using credit cards, often at least in part due to a lack of universal acceptance. Primarily these are industries that involve very small or very large payments.

This all comes into focus when you look at some of the retail categories whose interchange fees will be reduced:

The fact that they’re balancing out these reductions with increases elsewhere isn’t just a reflection of the value of Visa products — it also reflects the reality that credit card fees are a major source of revenue for issuing banks.

Raising fees also has very little downside for card networks, at least when it comes to established markets. Customers don't concern themselves with interchange fees when deciding between credit cards, and when merchants have to raise their prices to make up for rising fees, customers tend to blame the merchant.

How much are Visa’s interchange fees changing?

Visa hasn’t published details about the rate changes yet, but journalists who were able to see the document Visa circulated to banks have been able to provide some specifics:

In the first example provided, a merchant in a card-not-present environment processes a $100 transaction. Under the old rates still in effect, the interchange fee would be $1.90 for a regular payment card and $2.50 for a premium card. When the new rates take effect, the fees will go up nine and ten cents respectively: $1.99 for a regular card and $2.60 for a premium.

The second example is a card-present environment, specifically a supermarket-type retail store. Here, a $50 transaction with a premium payment card incurs a fee of $1.15 at present, but this will drop to 77 cents under the new rates.

These changes only affect Visa’s published rates. Both banks and card networks will negotiate special rates with individual merchants in some circumstances.

The new rates were originally going to be implemented in 2020, but the change was delayed until 2021 due to the coronavirus pandemic, then delayed again due to the continuing pandemic and pressure from the United States Congress. Currently, the fees are scheduled to change in April 2022.

How can merchants prepare for rising interchange fees?

The biggest question for merchants when changes like these are looming is whether or not to raise prices to recoup the profits they’ll be losing to higher fees. Of course, there’s no one-size-fits-all answer to this question. Government agencies that accept card payments are often stuck adding processing fees as a separate charge, since they may be legally unable to raise their prices; retail merchants may not find this to be a viable option.

If you do raise prices, make sure you provide adequate advance notice to customers where appropriate — recurring billing, for example, may require specific consent and actions from the cardholder, or else you run the risk of inviting payment disputes and chargebacks.

You may also be wondering if Mastercard has fee changes of their own in the works. After all, the big card networks tend to move in concert in matters like these, and higher fees might cause banks to steer their customers toward Visa cards. In fact, Mastercard already announced changes to their interchange fees that would go into effect at the same time as Visa's. Like Visa, Mastercard also delayed these changes until 2022.

Visa is hoping that slashing interchange fees for certain retailers will help them make some inroads into markets that were once the exclusive domain of spare quarters and checkbooks. They’ll probably succeed — all signs point to digital, contactless payments continuing to trend upward — but merchants in the already Visa-saturated eCommerce sector may end up paying the price for this expansion.

When unavoidable cost increases come your way, that’s a good time to look at the areas of your business where you do have the power to cut costs and boost your revenue—like reviewing your chargeback prevention strategy and beefing up your defenses where you still have vulnerabilities.

Is an interchange fee the same as a network fee?

What are Visa interchange fees?

Interchange fees are assessed based on the type of merchant and the type of card used. For example, a small retail merchant taking a payment from a standard Visa card will be charged $0.10 plus 1.43% of the transaction amount. 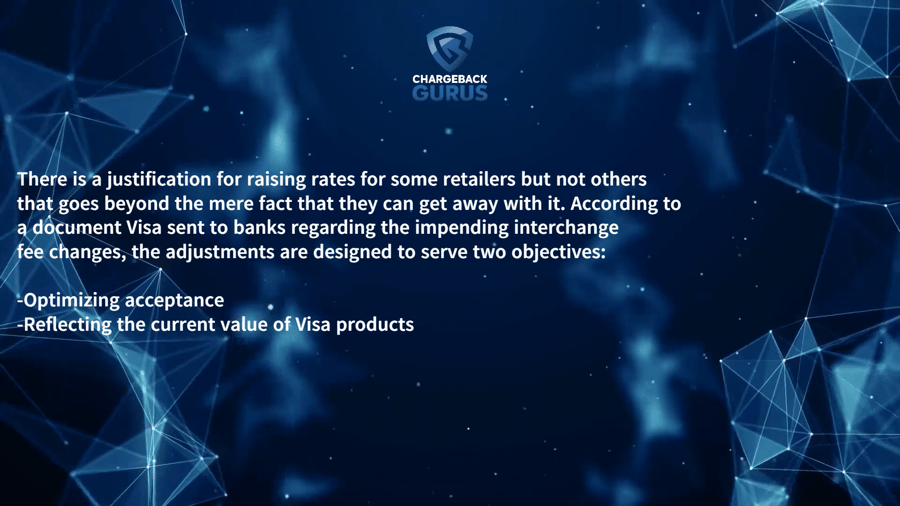 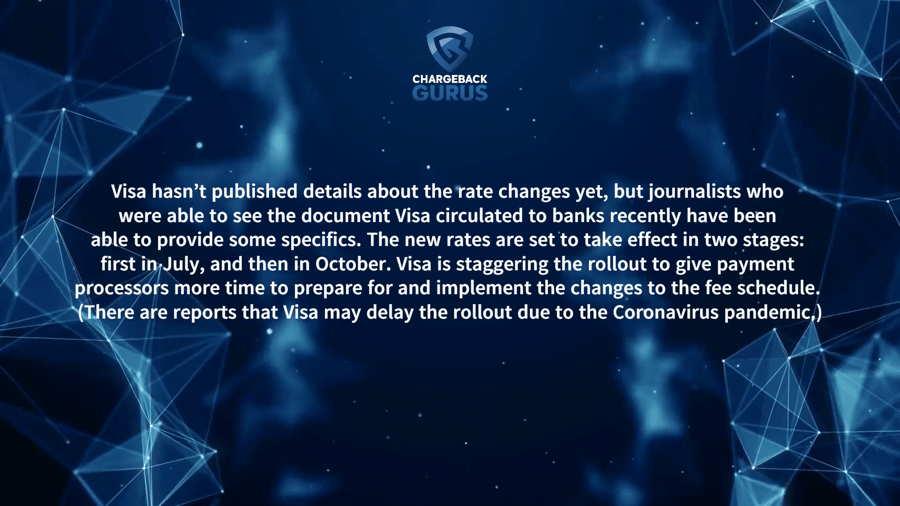 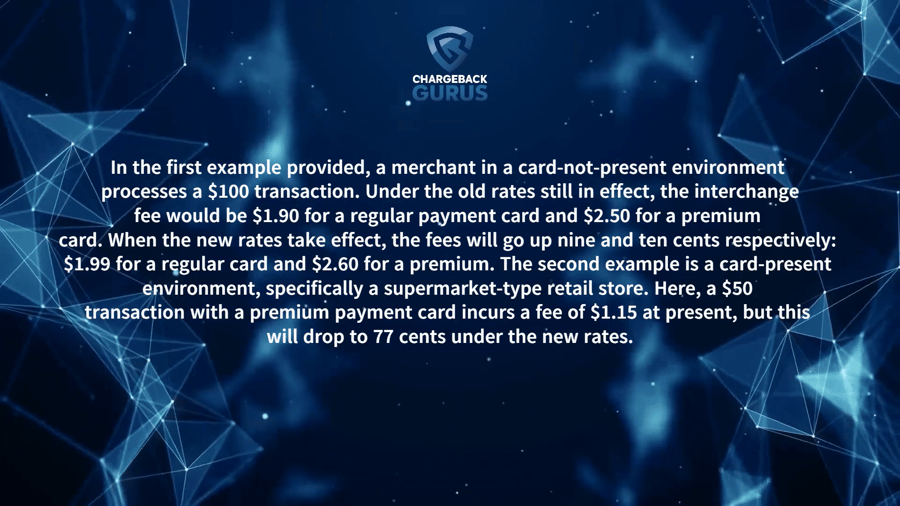