For merchants making their first ventures into the waters of ecommerce, platforms like Shopify can be extraordinarily helpful. By serving as a single source solution for the biggest hurdles that new entrepreneurs face, these providers can be the deciding factor between a business idea becoming reality or not. Unfortunately, chargebacks will find Shopify merchants as surely as they will any other, and Shopify imposes some of their own requirements on the process. What do merchants need to know before they start dealing with chargebacks that come through Shopify?

Easy to set up and use, there are reportedly half a million active Shopify stores on the web, making it the third-biggest online retailer in the United States after Amazon and eBay. One of the roles Shopify can fill for merchants is as their payment gateway. That places them in the middle of all the merchants’ credit card transactions and makes them a key player in disputes and chargebacks.

In fact, Shopify will respond to the issuing bank and submit the merchant’s response in the event of a chargeback. Merchants who use Shopify must understand this and establish procedures to acknowledge and fight chargebacks from within the Shopify framework, as required, in order to stay on top of their disputes and keep chargebacks to a minimum.

How Do Shopify Chargebacks Work?

When a customer disputes a transaction and gets a chargeback on a purchase that was made through Shopify, your merchant account will be debited the amount of the transaction plus the chargeback fee. As with all chargebacks, the issuing bank will then review the cardholder’s claim and the evidence submitted in the merchant’s response and make a decision. If the issuer finds in favor of the merchant, the transaction amount is returned and Shopify refunds the chargeback fee ($15 in the U.S.). Shopify tells its merchants to allow up to 120 days for the issuer’s decision.

Merchants who use Shopify Payments may find chargeback amounts instead subtracted from their next payout amount, instead of debited from merchant account funds.

Shopify merchants may also receive inquiries on disputes that have not yet been processed as chargebacks by the issuer. Upon receiving an inquiry, they will have an opportunity to provide evidence, communicate with the customer, or issue a refund to resolve the problem.

How Can I Manage My Shopify Chargebacks?

Shopify Payments users can manage their chargebacks directly from within the Shopify admin.

Shopify has four status categories for chargebacks and inquiries:

If you use Shopify Payments, using the order filters to review the status of your chargebacks should be a daily process. You will easily be able to see which ones need your attention and which have already been handled.

How Can I Fight Shopify Chargebacks?

Inside or outside of Shopify, the basic approach for fighting chargebacks is fairly straightforward:

Each category has different evidentiary requirements. For example, “fraudulent” chargebacks may be impossible to fight if they result from true criminal fraud, but many of these are legitimate transactions that the customer is disputing by mistake or out of an intent to defraud the merchant themselves. “Friendly fraud” chargebacks can be fought by submitting evidence that clearly shows that the cardholder placed the transaction and used or consumed the product they received. “Product not received” chargebacks can be fought with proof of delivery. Other chargebacks occupy more of a gray area, and may require rebuttal letters explaining the merchant’s position.

Chargebacks from the “unrecognized” or “product unacceptable” categories may fall in this area. Issuers may find them challenging to adjudicate, and merchants may find it easier to apply some preventive medicine. Changing your merchant descriptor for more clarity can help with “unrecognized”—you want your store name to appear prominently, along with a phone number customers can call. “Product unacceptable” chargebacks may point to issues with your marketing copy or the promises your salespeople are making. Make sure you product descriptions are accurate, truthful, and do not promise more than you can really deliver.

Shopify provides useful advice for merchants about what types of evidence to submit for which chargebacks, but nothing beats firsthand experience when it comes to learning how to fight the specific types of chargebacks your business will face.

You don’t have to build a website from scratch and hand-code your own shopping cart software to have a place at the ecommerce table, and Shopify making it possible for thousands of merchants to get on the web and start selling without having to invest huge sums of money into consultants and web designers. Of course, with such comprehensive assistance comes some loss of control, and when you’re a Shopify Payments customer you have to train yourself to work with Shopify to manage and respond to chargebacks.

The good news is, Shopify makes chargeback management fairly easy as well, so as long as you understand where to look for them and take the time to learn how to record, store, and submit the right evidence to win your disputes, you can make Shopify part of a winning ecommerce strategy that doesn’t knuckle under to chargebacks. 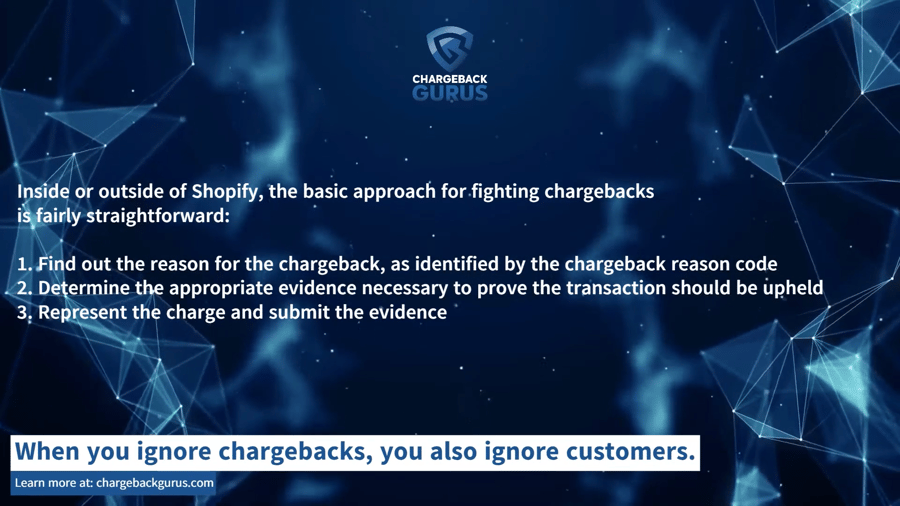 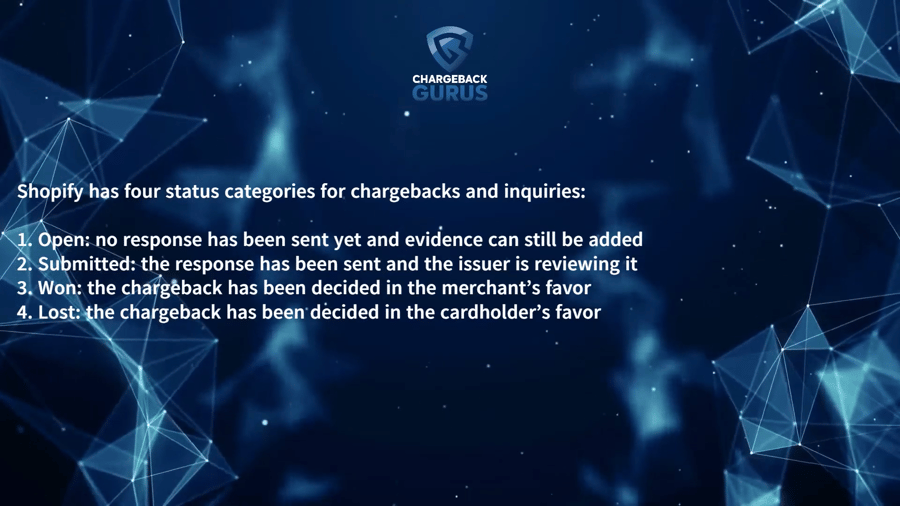 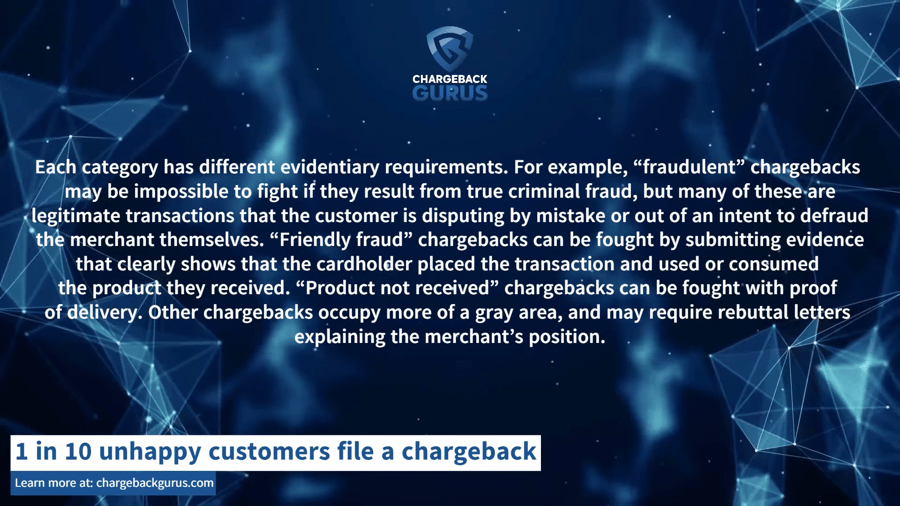 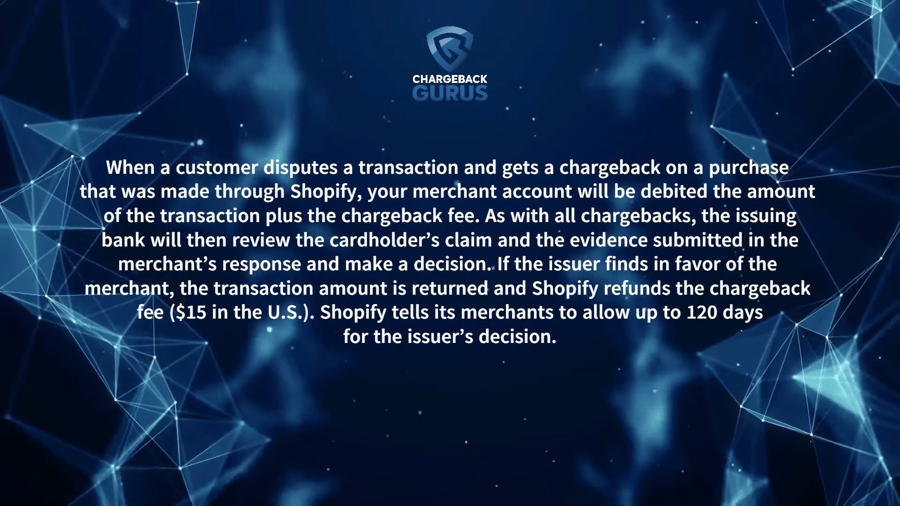 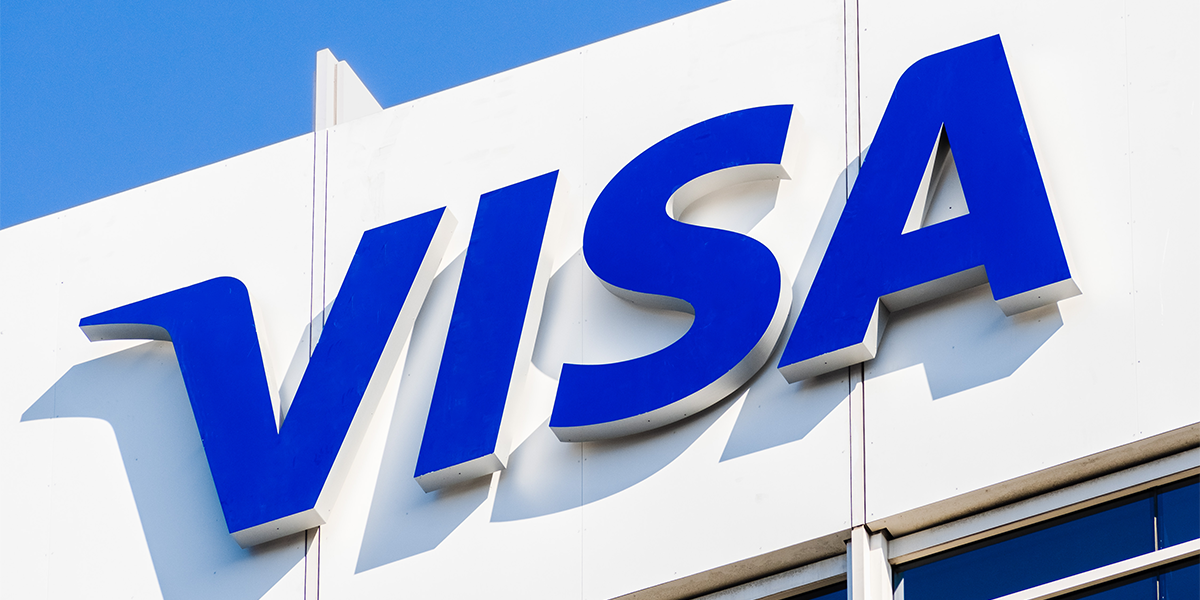