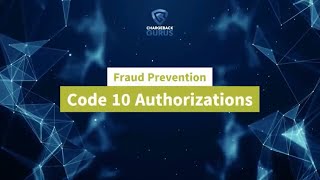 Most of the anti-fraud tools available to merchants are designed to work automatically according to cold machine logic, using algorithms to block fraudulent transactions behind the scenes. In the card-present environment, however, merchants and their employees must sometimes make very human decisions to stop fraud while it is taking place. This may involve placing a Code 10 call to alert the issuing bank to possible fraud without tipping off the suspicious customer. How can merchants know when it’s the right time to call in a Code 10?

To the customer in the store, the Code 10 call sounds like a normal voice authorization request, with the merchant not saying much beyond answering “yes” or “no” questions. To the issuing bank, however, “Code 10” signifies that the merchant suspects possible fraud: either that the payment card has been stolen or tampered with, or that the customer is not who they claim to be.

For merchants and their employees, it can be difficult to make a confident decision about when and if to make a Code 10 call. It can also be nerve-wracking, as the call may have to be made in front of a person possibly engaged in criminal activity. Of course, merchants and workers must put their own safety first, but if they do not believe that placing the call will put them in danger, the decision should be made based on whether reliable indicators of fraud are present. Note that you can place a Code 10 call after the fact, but it will be too late to stop the transaction.

When Should Merchants Place a Code Ten Call?

Card-present fraud, perpetrated in a face-to-face transaction, is rare relative to eCommerce fraud. Nevertheless, it does happen, in situations ranging from the casual theft of a family member’s card to organized fraud operations. The Code 10 call gives merchants a chance to bring possible fraud to the card issuer’s attention and receive instructions from them about how to proceed with the transaction.

The format of the Code 10 call is designed to be discreet, so that it can be made in front of the customer, but they can be lengthy.

You should place a Code 10 call when you have reason to believe that a customer is using a credit card fraudulently. There are various reasons and indicators that may lead you to this conclusion:

It is often the customer’s behavior that leads merchants to suspect fraud, but you must be careful about following this subjective indicator. When a customer is behaving in a bizarre or threatening manner, the safety of your workers and customers must come first. It is also not at all uncommon to misinterpret anxious or culturally unfamiliar behavior as “suspicious.” Neurodivergent customers, such as those with ADHD or autism, may also display behavior that can be incorrectly interpreted as suspicious.

However, there are some actions the customer may take that can be more reliable signs of possible fraud. These could include signing the receipt with a different signature than what appears on the card, asking to swipe the card instead of using the EMV chip, or efforts to keep the name on the card hidden.

It's also not uncommon for employees to falsely suspect transgender customers of fraud, since the apparent gender of the customer may not match that of the name on the card. In order to avoid alienating customers, it's typically best practice to avoid treating a perceived mismatch in gender as indicative of fraud. A customer who is met with a code 10 call once will likely think a simple error has occurred, but if a particular merchant is making a code 10 call every time they make a purchase, they'll quickly realize something is going on.

Sometimes, of course, your suspicion won’t match any predetermined criteria, but your gut instinct will tell you something is wrong. There’s no simple guideline for knowing when to act on these feelings, but experience may teach you how to recognize the signs of fraud that are specific to your type of business.

What Happens on a Code Ten Call?

To place a Code 10 call, tell the customer that you must make a phone call to authorize the transaction. Take the card and dial the number you call for voice authorizations. When an operator answers the call, you say: “I have a Code 10 authorization request.” You should have the card in hand when placing the call. Since you will usually be placing these calls in front of the customer, you should maintain a calm and professional demeanor while speaking.

The operator will ask you for some information and details about the transaction, most of which you should be able to answer with “yes” or “no.”

The operator should not ask you anything that will require you to answer in a way that would cause the customer to realize that you suspect them of fraud.

In a scenario where the issuer is certain of fraud, you may be instructed to retain possession of the card, call law enforcement, or both. Once again, you should follow these instructions only so long as your own personal safety is not compromised. If you feel that the safest course of action is to finish processing the transaction and allow the customer to leave without a confrontation, do that, and call law enforcement and your payment processor as soon as they leave. While a chargeback can certainly be costly, it's never worth putting your safety or the safety of your employees and customers at risk.

Code Ten Authorization in a Nutshell

Placing a Code 10 call may feel intimidating, but these calls do have the potential to prevent you from being victimized by fraud, stop a fraudster in the act, and spare other merchants from future fraud. If you have reason to safely place a Code 10 call but decline to do so, it’s extremely likely that the transaction will come back to bite you as a true fraud chargeback that you won’t be able to fight.

These calls require some quick judgment calls and risk assessment in the heat of the moment, so don’t add logistical difficulties to the mix. Make sure the numbers you need to call are clearly identified and posted near the phone. Covertly calling out fraudsters with a Code 10 may be a big responsibility, but it can do a lot to stop fraud and prevent chargebacks.

What Is a Code Ten Call?

A code 10 call is a way for merchants to check with an issuing bank about the possibility of credit card fraud. The bank can tell merchants whether the card has been reported missing, or can call or text the customer to confirm the transaction. 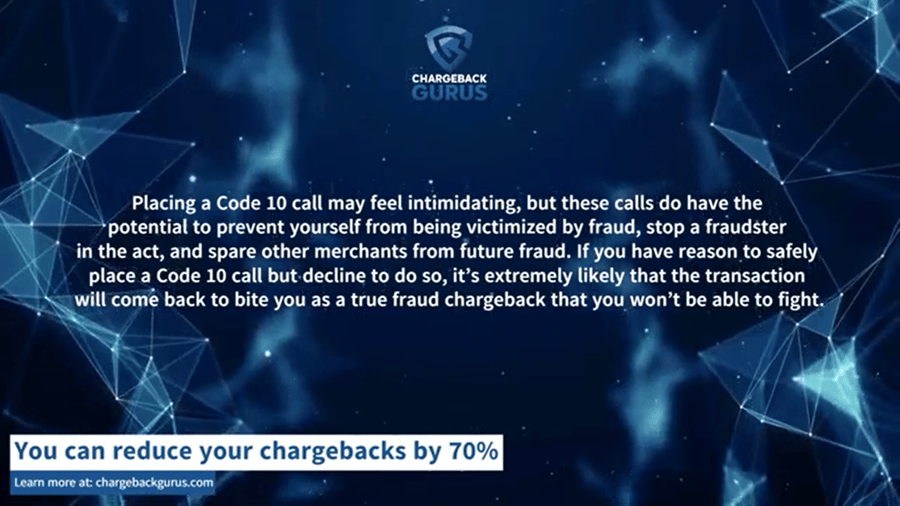 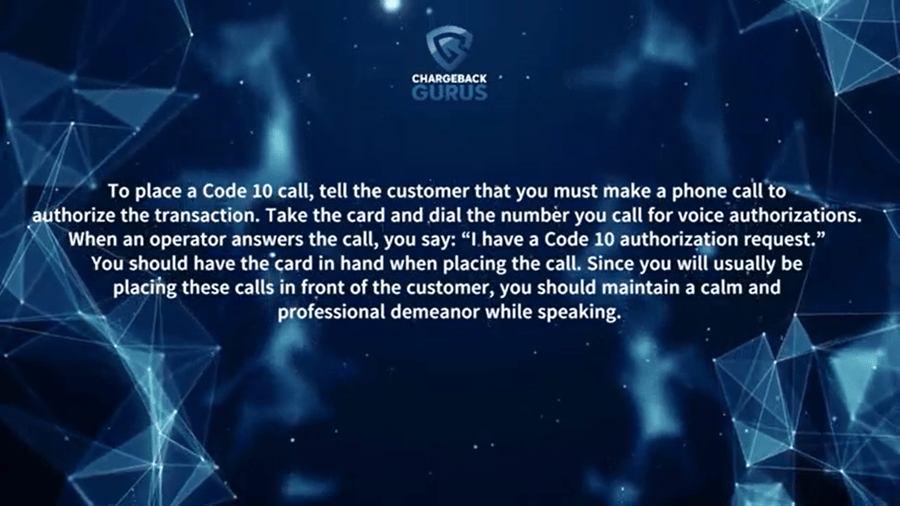 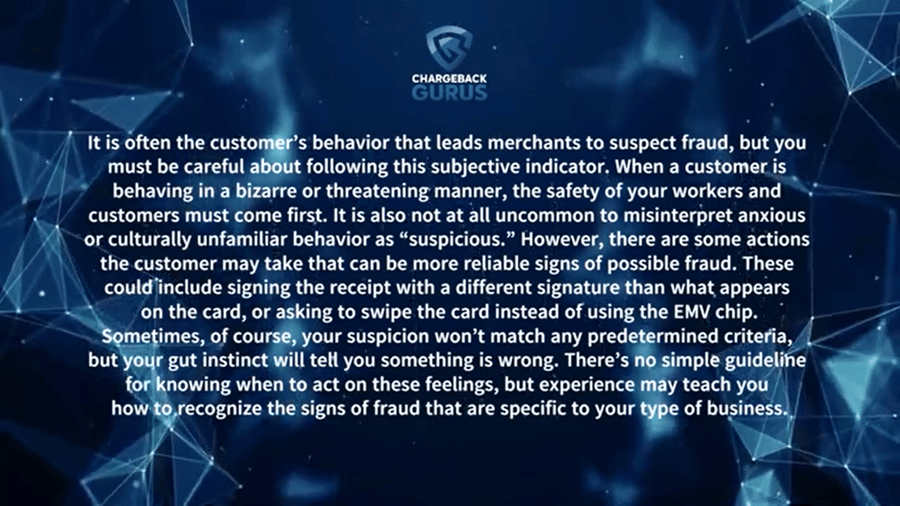 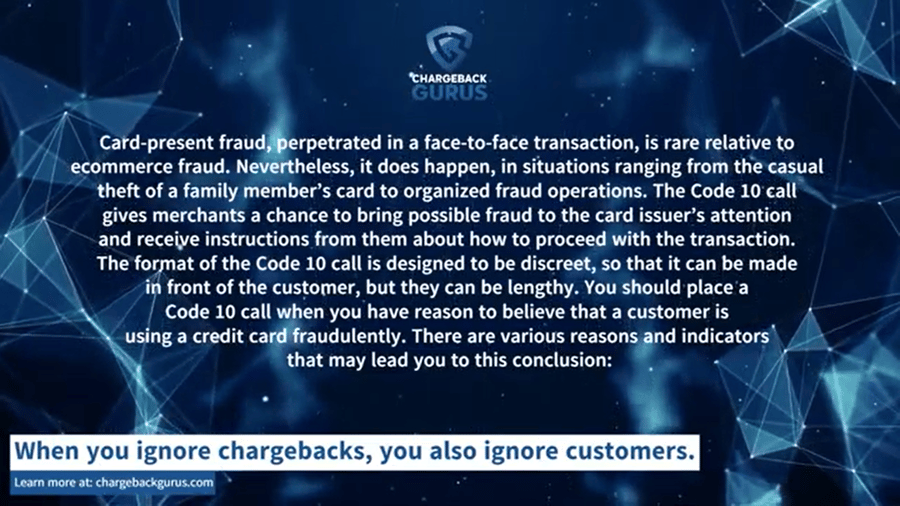 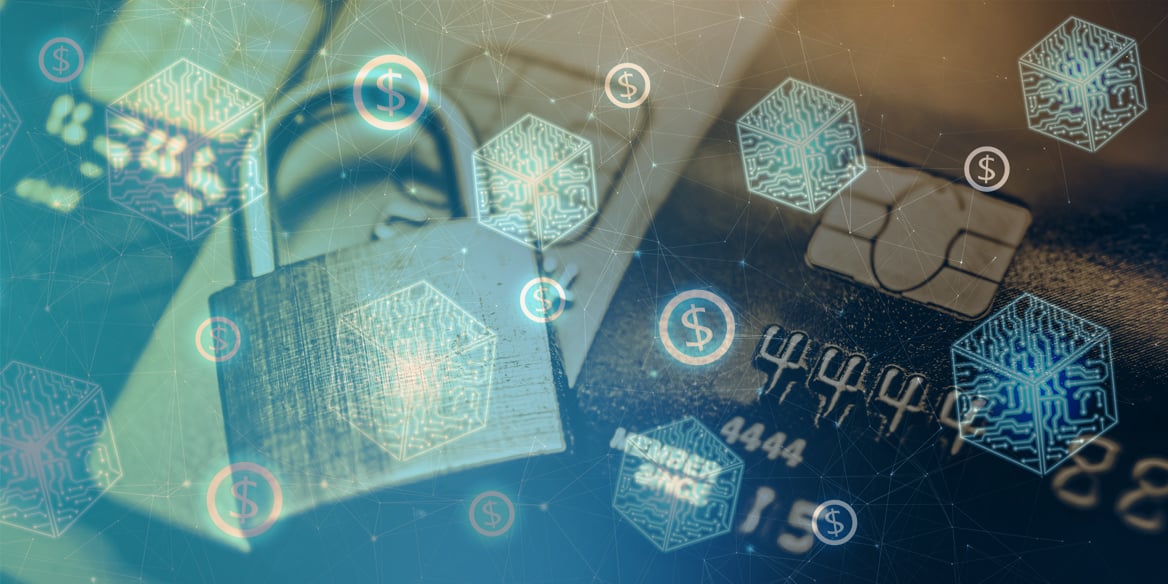