Visa Claims Resolution (VCR) & What It Means For Merchants

In order to improve their processes, reduce fraud, and address any loopholes or abuses of their systems they discover, all the major card networks make frequent updates to their rules and policies. Most of these changes are fairly minor, but every once in a while a change comes along that really shakes things up. The EMV liability shift is one example of this.

What is Visa Claims Resolution?

Visa Claims Resolution is a global mandate from Visa that went into effect on April 15, 2018. It made major changes to Visa's chargeback process, terminology, and reason codes.

What chargeback terminology did Visa change with VCR?

The first thing Visa changed is the word chargeback. Visa now refers to them as "disputes" instead. Visa also now refers to the part of the chargeback process where the merchant can present evidence disproving the cardholder's claim as a "dispute response" rather than representment.

Visa also overhauled its system of chargeback reason codes. The new codes, which can be found in our reason code guide, start with a two-digit number indicating which of Visa's four dispute categories it falls into:

What is VCR Allocation?

Allocation is a process for Visa disputes that attempts to weed out some illegitimate chargebacks and shorten the time affected disputes take to resolve. Visa uses internal data and processes to automatically block disputes that don't meet Visa's requirements for validity.

Disputes that Visa determines to be invalid will have their liability assigned to the issuing bank. If a dispute is considered valid, the merchant can still contest it. However, rather than representment, (or a dispute response, as Visa now calls it), the merchant will be initiating pre-arbitration.

What is VCR Collaboration?

Collaboration is the new name for Visa's old chargeback process, where each party has several chances to investigate and submit evidence in order to determine whether a chargeback is legitimate.


This process is largely the same as it was before, but issuers will now have to fill out a form providing greater detail about the dispute before initiating the process.

Visa has also tightened the deadlines for both merchants and issuers. Here's a rundown of all the changes in detail: 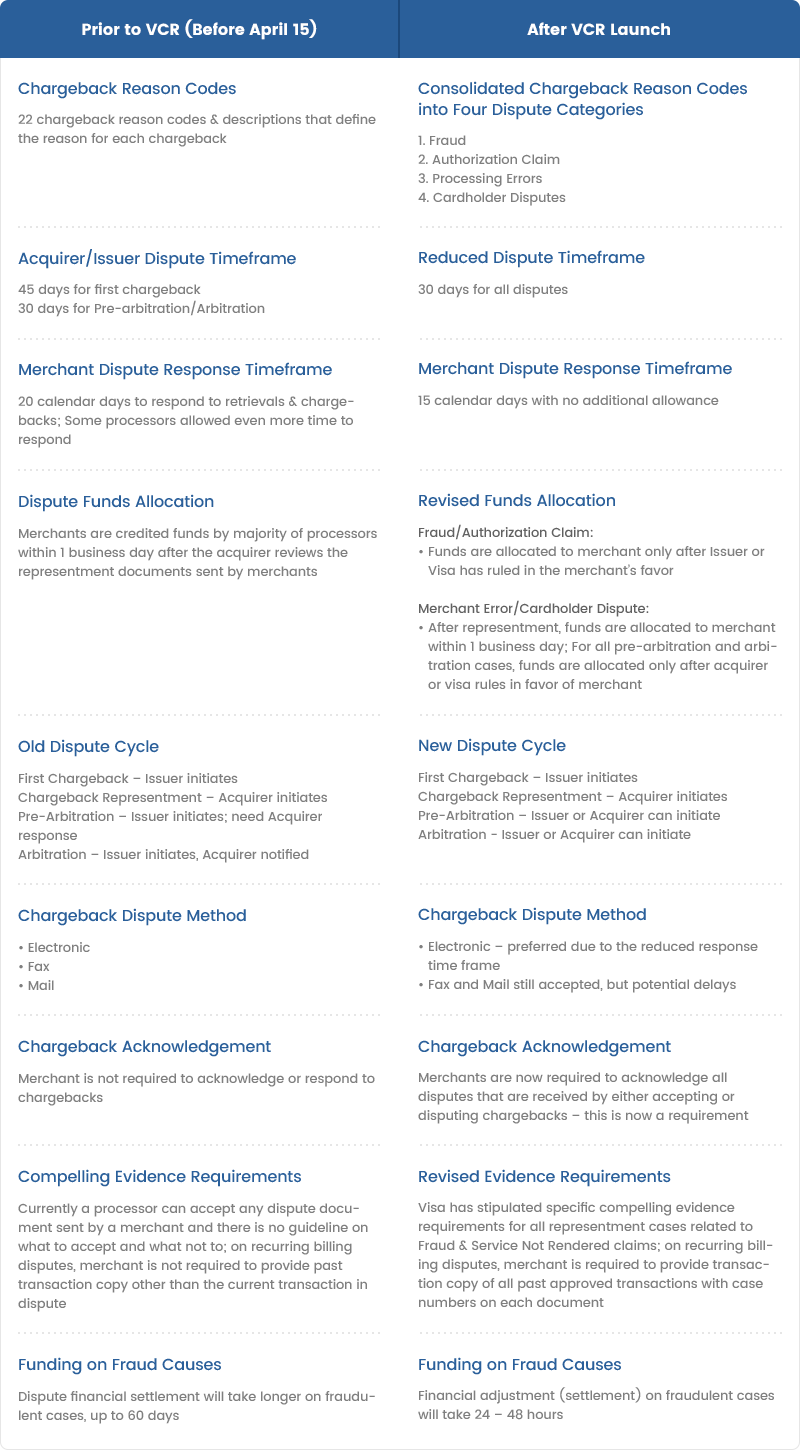 The biggest change for merchants is that they're now required to acknowledge all disputes, either by accepting them or by filing a dispute response. Merchants who don't acknowledge a dispute will still default to accepting it, but will now be charged an additional fee.

This makes the process more focused on resolving disputes without Visa getting involved through arbitration. Once a dispute enters arbitration, merchants and cardholders must accept Visa's decision. With the new process, a chargeback is more likely to be resolved before that happens.

What happens if you don't acknowledge a chargeback dispute?

For Visa chargebacks, merchants who don't acknowledge a dispute will be charged an additional fee. Merchants can respond by either accepting the dispute or fighting it.

Can the acquirer acknowledge chargeback disputes on behalf of a merchant?

Not usually. Merchants must acknowledge disputes themselves. However, platforms like PayPal and Amazon essentially take the role of the merchant in a dispute since they received the payment. These platforms may allow the actual merchant to dictate their course of action.

What do I have to do to ensure I am in compliance with VCR?

Your payment processor can provide instructions on how to acknowledge a dispute, a list of compelling evidence requirements, penalty information, and ways to respond to disputes faster.